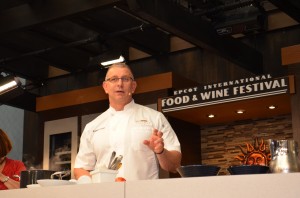 Each fall Epcot comes to life and celebrates the Culinary Arts as it presents the International Food & Wine Festival. This year was the 17th annual festival, which is presented by Chase, and runs from September 28th until November 12th.  During the festival there are many culinary experiences, one of which is the Kitchen Memories series.  This 3-course lunch evokes joyful kitchen memories. A celebrated chef demonstrates how to prepare an appetizer, main course and dessert, while a winery representative pairs each course with a selection of wines. These demonstrations are premium events and require an additional fee and reservations which are not included in park admission.

One of the celebrity chefs who did a demonstration this year was Chef Robert Irvine. Chef Robert has over twenty-five years in the culinary profession cooking all over the world. He has cooked in Europe, the Far East, the Caribbean and the Americas. He has worked in hotels and on the high seas, but most people know him as the host of the hit television show on Food Network  “Restaurant Impossible”. On the show he changes the lives of restaurateurs who are in severe debt and have failing restaurants by showing them the proper way to run a business and redesigns the restaurant in two days and only using $10,000.   The show is amazing, but people may not realize that he also has two very successful restaurants of his own.  Robert Irvine’s nosh is located in Bluffton, SC, and features his take on southern cuisine by utilizing regional ingredients with classic preparation and a chef driven twist while  Robert Irvine’s eat! is located in Hilton Head Island, SC and specializes in great American dishes… with a twist!

On October 26th, Chef Robert conducted his Kitchen Memories demo keeping those in attendance laughing at his stories about cooking in the British Royal Navy all the way thru his wedding to his wife professional wrestler Gail Kim all along not burning the food he was preparing.

The menu that Chef Robert prepared during his demonstration was as follows:

(paired with a Monterey Chardonnay)*

(paired with a Monterey Pinot Noir)*

*All wines were by La Crema Winery 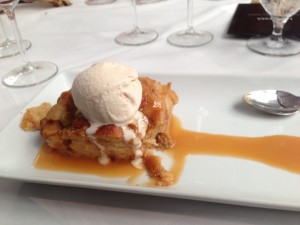 After the wonderful demo and meal Chef Robert prepared, he even took time to sign his cook books and take pictures for his fans young and old spending time talk to each person like they were the only one in the room. Chef Robert truly believes that he is still just a cook and wants to make sure everyone eats good, healthy food and takes care of each other. There are many ways you can keep up with him. You can check out his official website at chefirvine.com, his Facebook page , or by following him on Twitter at @robertirvine1.