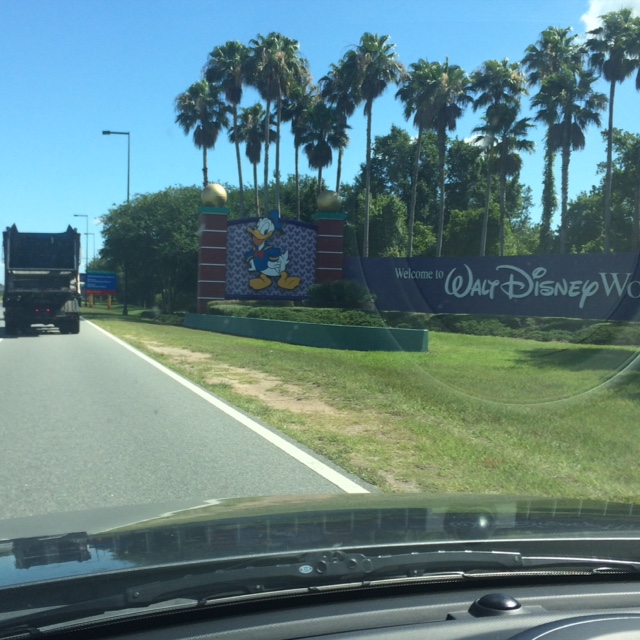 In the previous post, we had arrived at my parents’ house to spend the night.  I woke up around 3am.  I made a cup of coffee, loaded Jacob up in the Kia Soul, and we hit the road about 4am.  I knew he would at least sleep until 7/8am.  When traveling to Walt Disney World, we always stop at the same place to get gas, the Flying J.  My daddy says a truck stop usually has the best gas.  This was also the first stop to go to the bathroom.  So that meant I would have to get a sleeping 3 year old out of his car seat to go to the bathroom.  Well it so happened, Jacob woke up.  The trip to the potty was a funny one.  He kept telling me he did not have to go.  I told him that was fine because I was the one who needed to go.  The conversation in the stall continued with Jacob asking me if I had to go pee-pee or poo-poo.  I am trying to tell him to shhhhh.  I am glad we were the only ones in the bathroom.  I got a cup of coffee and Jacob got milk. 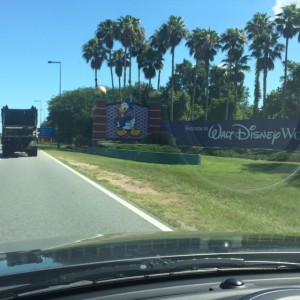 We pulled into Disney’s Pop Century Resort for our two night stay.  We were in a preferred room and the view was nice. 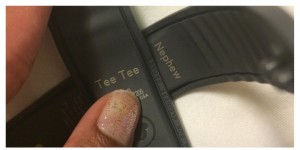 However, it was a distance from the parking lot.  Jacob was of little help because he wanted to ride in his stroller to the room. So visualize me pushing a stroller, pulling a luggage, and trying to keep a bag on my shoulder.  I was so happy to have a Mommy Hook on the stroller to hold at least one bag.  We made it to the room and I unpacked a little and changed our clothes.

In looking at the time, Jacob and I had missed our FastPass for Seven Dwarfs Mine Train.  How was I going to going to explain this to him?  I knew he would want to ride once he saw it.  I decided just to give him the line “we would ride it tomorrow” if he persisted in riding it.  One thing Jacob requested was to ride the bus.  Again, I was nervous about getting on the bus with him and a stroller. We managed due to the bus not being full.  He appeared happy riding the bus to the “Kingdom”.

I love seeing how the little things mean so much to a child. Such as wanting to ride a bus, tram, or monorail.  For Jacob, another little thing that he considers big is using his MagicBand.  He knows Mickey touches Mickey and it has to turn green to enter.  Turning blue means a no-no.  Here is a video of him entering the park.

Since we missed our first FastPass, we went into the Emporium for me to look around.  Being a boy, he was not too happy with this.  However, he did not complain much once I explained I was looking for a Mickey Mouse MagicBand and he could get a Pluto MagicBand. 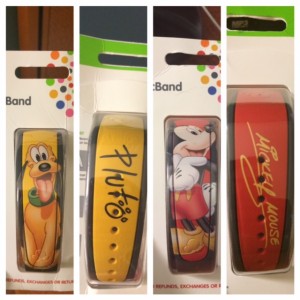 After getting our new MagicBands, we made our way to Splash Mountain.  Jacob first time riding this was in February.  He loved it.  His face does not look like it, but he laughs during the entire time and loves getting wet. 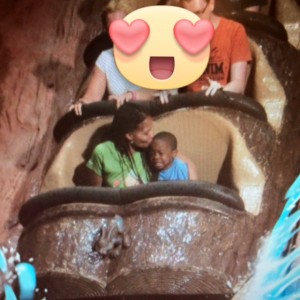 Down the “waterfall” we go

We enjoyed our ride to the Laughin’ Place and decided to take a small break while waiting on a friend to join us.  Scott arrived and we were off again.  Well not too fast.  It was potty time.  Jacob is getting better at saying he has to go to the toilet.  I was nervous about this because at times he will have accidents due to not saying he has to go.  Well he was on it today with telling me. There were no accidents.

After eating at Pinocchio Village Haus, we rode the PeopleMover (it will forever be that to me) and Carousel of Progress.  Jacob loved the PeopleMover due to it having dark parts.  We also road Goofy’s train (The Barnstormer).  Jacob asked about “the mine train” and was fine when I told him we would ride tomorrow. After riding the train from Fantasyland to the front of the park, I could tell getting up at 3am was catching up with me.  Jacob and I said good-bye to Scott AKA Mr. Scott. 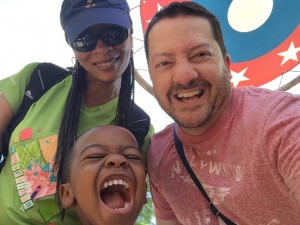 We got on our bus and headed back to our room.  We rested for an hour and then I decided to go to Disney’s Hollywood Studios to get a Starbucks mug.  We were there for less than an hour. 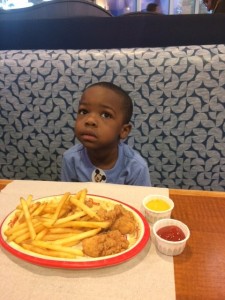 Must you take pictures of my food Tee Tee?

Now for another funny moment that again took place in the bathroom.  I was giving Jacob his bath when he asked me what I was doing.  I said giving him a bath.  He just looked at me.  There was silence until I told him I was trying and to stop judging me.  He did not know what I meant and just laughed.  We survived “tubtime”.

We are ready for bed.

We settled in with the television on Disney Junior.  I thought Jacob was sleep and attempted to change the channel.  He raised his head to say no.  I apologized and turned back to Disney Junior.  In less than five minutes, he was knocked out. I think our #TeeTeeNephewWDWtrip was off to a good start.