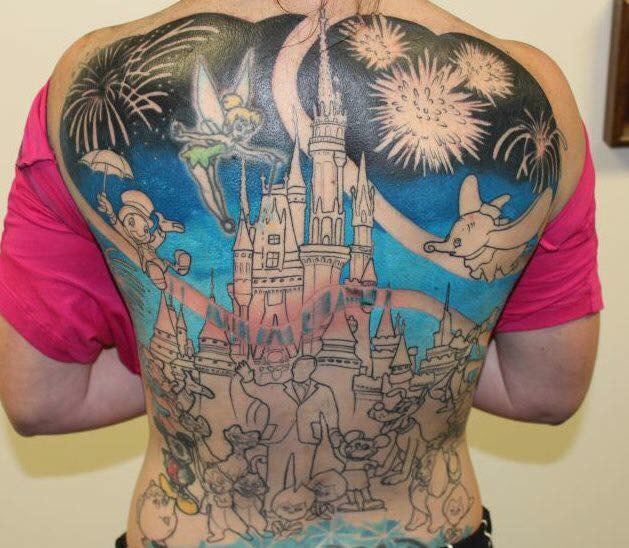 Some people have had the love for all things mouse from an early age because they grew up watching the Disney Channel, while for others it was magical feeling that they experienced walking into a Disney Theme Park for the first time. In any case, as Walt really wanted it to be, Disney has a way of invoking strong emotions in people. Those emotions lead some to display their love for Disney by getting a tattoo. In this series, we will talk to some of those people who are part of the “inkDisney” family. We want to find out why they love Disney so much and what inspired them to take their love for the Mouse to the next level. This week, we will talk to one of our readers. Her name is Mel and she is from Carnduff, Saskatchewan, Canada! 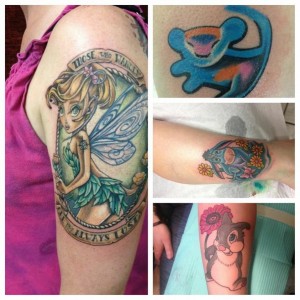 My love for Disney started when I was a little kid. I was obsessed with Disney cartoons and always had to watch the Sunday Disney special. I dreamed of one day going to Disney World for years. My favorite movie growing up was Cinderella. I loved the magic that Disney appeared to have and it was better than I could have ever imagined when I finally did go to Disney world in 2006. Since never going as a kid trying to make up for it now! Since 2006 we have travelled to Disney over 15 times and 13 Disney cruises so to say we love Disney is an understatement! lol 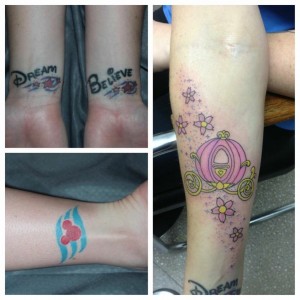 My first tattoo was a small mickey in 2007. It was followed by Tinkerbell, and then the Disney Cruise logo in 2008 after our first Disney cruise. I had always loved the idea of a full Disney back piece with the castle and everything that had a special memory and meaning to me. I discussed the idea with a friend that was a tattoo artist. I trusted his opinion and plans were made from there. The project started with taking a sharpie to my back and drawing a very bad rough sketch of my idea. My artist lived 6 hours away so planning was all done over phone and email.

In fall of 2011 we began tattooing the back piece. My artist was Tyler Alderson of Tantrix Body Art in Saskatoon SK. He spent hours researching pictures of the castle, partners statue and pictures of the characters I wanted. First session was spent placing each individual stencil that he’d drawn out on my back, and then he tattooed the outlining on everything. Next trip we did the back ground color. A couple months later he began tattooing castle and characters. In July of 2012 he finished tattooing my back by doing back to back days for a total of 15 hours over 2 days to finish it up. We travelled 6 hours each way while having this tattoo done so I really just wanted it finished!! In the end it was around 40 hours of tattoo time done over 5 sessions in 6 months. Total cost of this back piece was about $5200 not including gas, hotel stays etc. but it was worth every cent!!! Once my back was done I continued adding to my collection with a Tim Shumate Tinkerbell on my arm tattoed by Jason Doll of Dolls Studios. This was about 4 hours. As well as he did my wrists with words believe and dream! I then attended a tattoo show where I had a guest artist Jason Jones do my thumper tattoo. I have an Eeyore on my ankle done by Kirk Shepard, as well as Simba. I do have a couple of non-Disney tattoos including my water lily done by same artist that did my back. This piece won best tattoo of a tattoo show I attended. Also have my kitty Sammy tattooed as a memorial piece also done by Jason Doll. My most recent piece is Marie done by Dan Sydlo of Dolls Studios. Other small tattoos I have are a flower piece on my arm that I am currently making plans to add princesses to, a Tinkerbell silhouette, a dragonfly with hidden Mickeys and a Mickey on back of my neck. 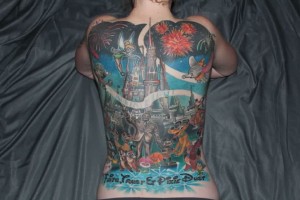 I love showing my love for Disney through art. I am able to carry my favorite place in the world with me every day! I love when people approach me in the parks to ask about my tattoos and take pictures of my back piece. My tattoos represent who I am and what I love and I am very happy to share my love of Disney!

Future plans for Disney tattoos include a Disney cat leg piece featuring my favorite cats of Disney films, princess sleeve, run Disney tattoo and a castaway cay piece. There will always be something more to tattoo until I run out of skin! 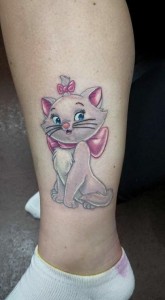