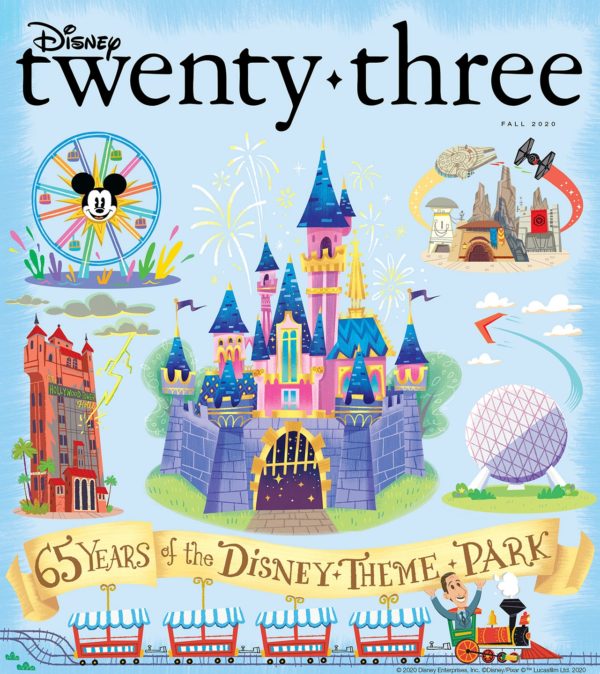 Want to learn more about the upcoming issue of Disney twenty-three? The official press release is below.

BURBANK, Calif. – August 6, 2020 – It was 65 years ago that Disneyland first welcomed guests to enjoy a new kind of experience: the theme park. And to mark the occasion, Disney twenty-three has created a one-of-a-kind, stand-alone issue, filled with rich stories and stunning photography that look
at the development and evolution of the Disney theme park. Disney artist Ricky De Los Angeles created an exclusive wrap-around cover for the issue featuring colorful illustrations of iconic attractions (and snacks!) from Disney parks around the world. Disney Parks, Experiences and Products Chairman Josh D’Amaro penned a special “Editor’s Letter” for readers, highlighting his deep connection with the theme parks, and stories include exclusive interviews with Disney Legends Tony Baxter and Wing T. Chao; Imagineers Tom Fitzgerald and Bhavna Mistry; original Mouseketeer Bobby Burgess; and Walt Disney Imagineering President Bob Weis.

The Disney twenty-three team pulled together a robust selection of stories written by subject matter experts including:
• Walt’s Map to the Magic: A deep dive into the inspiration, planning, and creation of Disneyland penned by Walt Disney Archives Director Becky Cline and publication editor Max Lark
• Dateline Disneyland: July 17, 1955: A guided tour of Disneyland on opening day by D23’s Manager of Content Curation (and former Disneyland Park tour guide) Justin Arthur
• Picturing the Parks: A curated look at some of the most beloved attraction posters from Disney’s parks around the world written by Disney Publishing’s Editorial Director Wendy Lefkon
• National Treasures: Stunning images from several of National Geographic’s many trips to the parks from National Geographic’s Caitlin Holbrook
• Rooms with a View: The evolution of Disney’s immersive resorts and vacation experiences from the Disneyland Hotel to a galaxy far, far away by Disney Vacation Club’s Ryan March
• Character Analysis: Park Stars: Beloved characters created just for Disney parks, from the Orange Bird and Figment to the Country Bears and Chandu, written by Disney Parks’ Charles Stovall
• And much, much more including a roundup of every glorious Disney castle, a look at our remarkable cast members around the world, the Disney spectacular examined, and an advance peek at the new book Holiday Magic in the Disney Parks

Plus, D23: The Official Disney Fan Club is extending the celebration for fans and members including:
• Expanded Digital Storytelling: More than a dozen original features on D23.com looking at the Disney theme park, from a look at movies filmed at Disney parks (Saving Mr. Banks and Tomorrowland) to delicious vintage parks recipes.
• An Exclusive Pin Set: Available only to D23 Gold and Gold Family Members, this 6-pin set features some of the colorful artwork from Ricky De Los Angeles’ cover of Disney twenty-three, including Sleeping Beauty Castle at Disneyland Resort, Matterhorn Bobsleds at Disneyland Resort, Ratatouille: The Adventure at Disneyland Paris, Spaceship Earth at Walt Disney World Resort, Mystic Manor at Hong Kong Disneyland Resort, and one inspired by Star Wars: Galaxy’s Edge at Disneyland Resort and Walt Disney World Resort. The limited-edition set will be available for $49.99 on August 31 at shopDisney.com.

• Disney Imagineers Celebrate 65 Years of Disneyland Park: From August 21 through August 23, D23 Gold and Gold Family Members will have the chance to watch an exclusive virtual panel created by Walt Disney Imagineering celebrating the 65th anniversary of Disneyland with
Imagineering leaders Jeanette Lomboy, Kim Irvine, and Scott Trowbridge, along with Disney Legend Tony Baxter, and moderated by Leslie Iwerks, director and executive producer of The Imagineering Story on Disney+.
• D23 Trivia Night: 65 Years of the Disney Theme Park: Disney parks trivia aficionados are invited to join a fun evening of trivia spanning every Disney park around the globe. On August 28, D23 Gold and Gold Family Members can join the fun to celebrate 65 years of favorite places and attractions—classic and new.
• D23 Magical Summer Sweepstakes: Starting August 10, all D23 Members will be able to enter to win exciting prizes, including a new D23 Gold Membership and the exclusive 6-pin set.
• Special Gold Member Gift: Just for D23 Gold and Gold Family Members, this issue of Disney twenty-three will include a set of six postcards—each representing a different Disney resort around the world.

No purchase is necessary to enter the weekly sweepstakes. Open to all D23 Members who are residents of the 50 United States or D.C., 18 or older. For details, visit https://d23.com/entry/magicalsummer-sweepstakes.
Additional details will be available at D23.com. Disney twenty-three, which is delivered directly to fans’ doorsteps, is offered exclusively to D23 Gold and Gold Family Members as a benefit of their membership. The latest issue will begin arriving before the end of August.