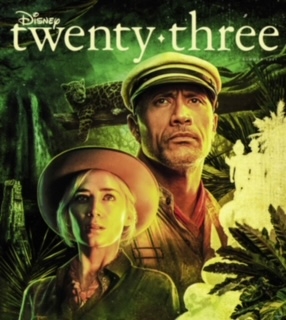 Per the D23 official release

The summer 2021 issue of Disney twenty-three is making a splash (and if you don’t believe us, you’re in… de-Nile) showcasing Dwayne Johnson and Emily Blunt in an exclusive wrap-around cover to celebrate the July 30 opening of the rollicking adventure Jungle Cruise. Editor-in-chief Max Lark journeyed to the backside of water, visiting the breathtaking tropical set of the film to speak with its stars and creative team about turning the beloved Disney Parks favorite into a thrilling new movie. Fans also get a fascinating look at the creation of Jungle Cruise for Disneyland and the exciting changes in store for the attraction this year.

Plus, in honor of Lucasfilm’s 50th anniversary, every issue of the publication will be shipped with a poster created exclusively for

D23: The Official Disney Fan Club, featuring stunning poster artwork from every film the studio has made over the past five decades, including rarely seen images from one-sheets around the world.

Also in the new issue, which is available exclusively to D23 Gold Members, Tom Hiddleston discusses spinning off the wickedly wonderful Loki for his new Marvel Studios series on Disney+ and bringing an entirely “new” version of the God of Mischief to life. Hiddleston’s on-screen brother, Chris Hemsworth, dons a different kind of (swim)suit as he takes a dip with some apex predators for National Geographic’s Shark Beach, as the avid surfer and environmentalist dives beneath the surface of what we know about the toothy creatures. And Disney twenty-three goes behind-the-seams with Academy Award® winner Emma Thompson for a special look at the ferociously fashion-forward Cruella, coming to theaters and Disney+ Premier Access May 28.

And on June 4, Super Hero fans will assemble at Disney California Adventure for the opening of Avengers Campus, a stunning new land where guests will be able to sling webs with Spider-Man and eat enormous pretzels thanks to “Pym” technology. Amidst stunning photography, the Imagineers and creators of the Campus detail its creation and what guests can expect, and it’s… super.

Additional details will be available at D23.com. Disney twenty-three, which is delivered directly to fans’ doorsteps, is offered exclusively to D23 Gold Members as a benefit of their membership. The latest issue will begin arriving before the end of May.