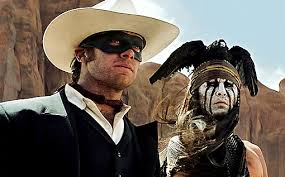 When I saw that first preview of The Lone Ranger, I knew I wanted to see it. Plus it would be released on my birthday.  I will be honest in saying that Johnny Depp as Tonto drew me to the movie.  I was concerned if I would be able to view Captain Jack Sparrow as an American Indian.  That concern was put to rest.  I was able to obtain 2 tickets to an early screening at Atlantic Station Regal Cinemas in Atlanta, GA. I decided to take my sister, who loves Johnny Depp as well.

I have never watched The Lone Ranger television series.  So I did not have anything to compare the movie to.  I had heard of the story of The Lone Ranger, his American Indian companion, and his house, Silver. So I went into the movie with a fresh and open mind.

Johnny Depp did not disappointment.  He went from being the companion to the character who stole the show in his own way.  Armie Hammer at times did make me upset because I wanted him to “man up”.  However, I knew he was on the side of justice and doing what was right.  I was surprised by a couple of things due to me not putting two and two together.  I think Johnny was distracting me.

I would recommend going to see the movie.  I can sum up the movie by saying, there is action, intriguing characters, the theme of justice will prevail, some gore, the horse could be stupid or acting stupid per Tonto, strangers becoming friends, and not all bunnies are cuddly.