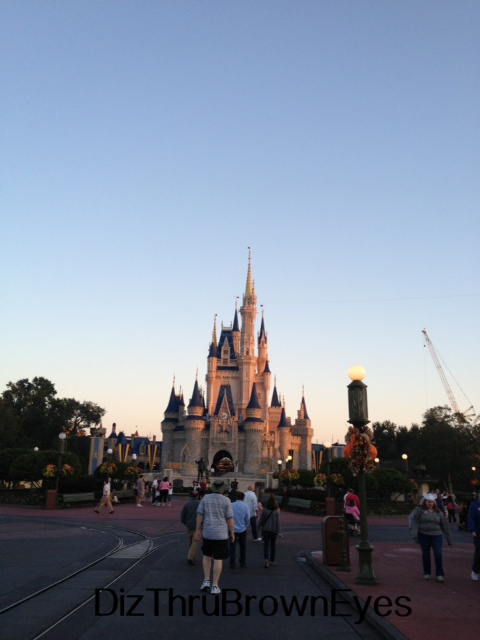 On November 3rd, I was able to take a preview of New Fantasyland by signing up through D23.  Once I secured my spot, I was very excited about the opportunity to walk around and take it all in before the grand opening on December 6th.  Oh, I have plans on being present for the grand opening as well.

I signed up for the time frame of 8am – 11:30am.  I am a morning person, so this time was perfect for me.  Due to flying, I was utilizing the Disney bus system.  For some reason the Magic Kingdom bus was running slower than others.  However, I realized Magic Kingdom was a distance from Pop Century.  Once on the bus, I was reading tweets on my phone from people, who were already present and waiting to get in.  I hopped off the bus and did my power walking to security; security was a breeze. I was ushered into a line of guests that signed up as a D23 member, Annual Passholder, and, if I heard right, Cast Members having a preview as well.  So there appeared to be three groups waiting to enter the park for the preview. There was some confusion due to where to get wristbands.  D23 members were told to pick up wristbands in City Hall and Annual Passholders were to get their wristbands at the Ticket and Transportation Center.  There were also wristbands given to Annual Passholders before entering the turnstiles due to them riding the buses or resort ferries.  I did not mind the confusion in the air because it has become the norm for these types of events and things usually work themselves out in the end. Once I got my red wristband, I made my way up an empty Main Street USA and was directed to Tomorrowland to get to Fantasyland.  I was in line near the Mad Tea Party.  I spoke to friends and before I knew it, I was entering New Fantasyland. 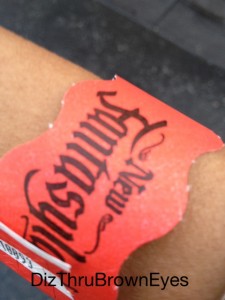 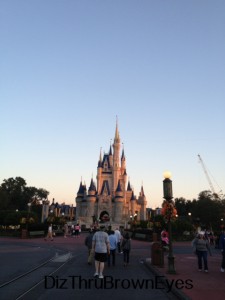 Upon entering, I first noticed the Beast castle in the distance. I took pictures on the walkway leading to Be Our Guest Restaurant.  Since I was so close to the restaurant, I decided to take a  tour and found the place to be amazing.  I was told lunch would be served and decided that is where I would eat.  My sister has been trying to get dinner reservations for our February 2013 trip, but no openings as of yet.  The restaurant would begin serving lunch around 10-10:30am.

I made my way into Belle’s Village and noticed the large Gaston statue in the fountain.  He made sure to show guests how “popular” he is here.  I did not go into Gaston’s Tavern right away.  I wanted to try LeFou’s Brew, the new drink, but due to me deicing to have lunch, I would wait. 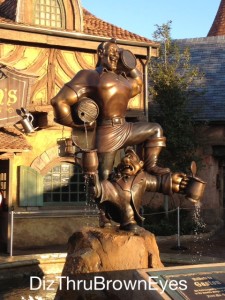 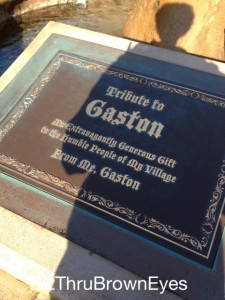 So of course I made my way into the store, Bonjour! Village Gifts. I saw the famous dishes and light up steins. I purchased a glass mug and knew it would be displayed on Mean Muggin’ Monday. I walked around Belle’s Village taking in the sights and details. 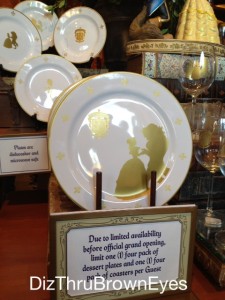 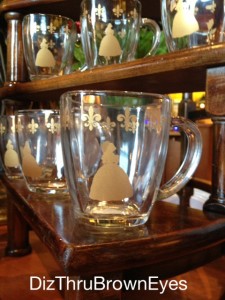 I walked around Belle’s Village taking in the sights and details. 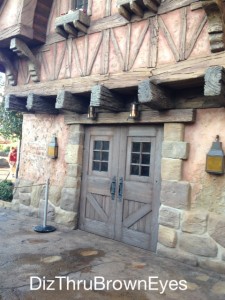 I once again buried my face in my phone and saw a tweet that an ADR was made for dinner at Be Our Guest.  I immediately went back to the restaurant to find out more.  I walked up to a Cast Member, who was standing in a little booth behind two laptops, and inquired about lunch.  She answered my questions, but made no mention of dinner. Was I at the right place to make an ADR or did I not ask the correct questions?  I went back to the Cast Member and inquired about dinner.  She proceeded to tell me she was taking reservations and listed several times available.  I asked for 4:05pm and was set.  I think I did a little skip when walking away.  Since this was a solo trip for me, I was going to have “A Me Party” at Be Our Guest.  I decided I would eat lunch some other place now. 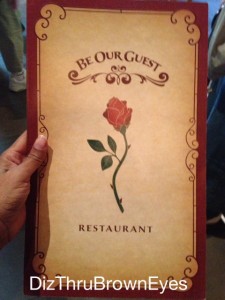 Feeling like I was on top of the world, I walked to Under the Sea: Journey of the Little Mermaid.   I chose the interactive que along with so many guests.  I found myself singing along while riding in my seashell.  I think guests of all ages would enjoy this ride. 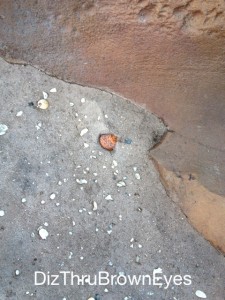 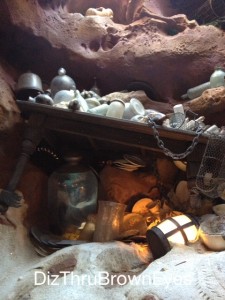 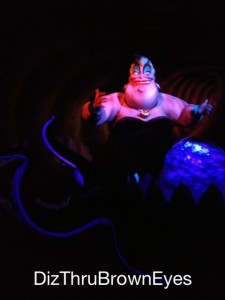 After getting off the ride, I got in line to order a LeFou’s Brew at Gaston’s Tavern.  The line had grown since I first entered the area.  Even though it was a little wait the line moved quickly.  I ordered my drink in a souvenir stein.  It was very sweet but I love apple juice.  This made for a good sugar rush to keep the energy up. 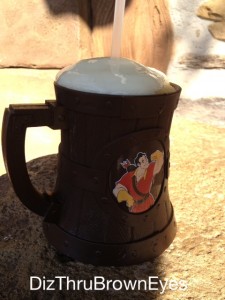 I left the area for a couple of hours and returned thirty minutes before my ADR.  I must say the Cast Members were politely turning people away who did not have a wristband to tour the area.

I was able to do a little people watching before checking in, as well as, take in more sights.  Here was my view of The Seven Dwarfs Mine Train: 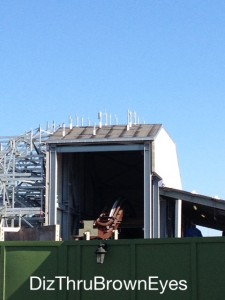 I was allowed to check in ten minutes before my scheduled reservation.  My buzzer went off and I was escorted in by a Cast Member who explained the sights inside of the restaurant to me.  He informed me of the Ballroom and the West Wing.  I was told special people are asked to dine in the West Wing and I was one of them.  I was happy about that.  The room is dark and has special effects. One family did ask to leave the room to be seated in the ballroom due to them having smaller children.  So if your children have an issue with the darkness, the Cast Members are more than happy to move you to a different room. To keep some of the excitement, I will not reveal the surprise touches. 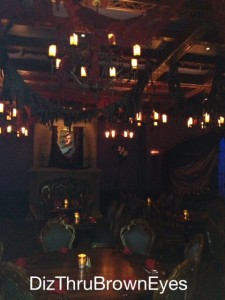 My waitress was Silvanete.  She was very nice and helpful.  She explained the menu to me and shared with me her favorites.  I am a picky eater and was very concerned if I would find something I would like.  I decided upon the Pan-seared Salmon on Leek Fondue served on top of saffron crushed potatoes.  I order a Coke and water as my drinks.  Before I knew it warm rolls were brought over.  While waiting on my food, I took some time to look around and take pictures. 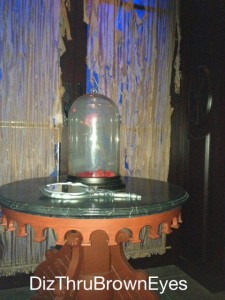 My meal was brought out promptly and at a good temperature.  The salmon was wonderful and the potatoes were excellent.  I know some foodies out there (like my sister) would use more adjectives than me in describing the meal.  I usually do not have room for dessert but wanted to try a cupcake due to me seeing them on the way in.  I chose the Tipple Chocolate Cupcake.  I am a chocolate lover and wonder why chocolate is not a food group. I ate all of it except the berry on top. Remember, picky eater.  By the time I finished my meal, the room had filled up considerably. 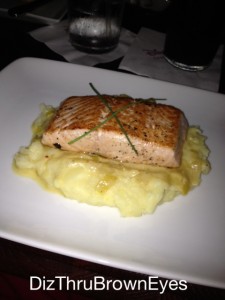 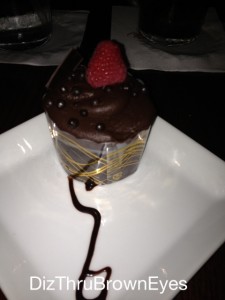 I had Disney friends stop by my table due to them being in the Ballroom.  After eating, I stopped by their tables to chat and take more pictures.  I was informed the cherubs on the ceiling were baby pictures of the Imagineers of the area.  I enjoyed my dining experience and will also try out the counter service here in the future.  Please cross fingers that I am able to get an ADR for February in order for my sister to dine here. 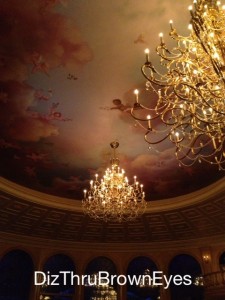 To sum up my New Fantasyland adventure, I would say I had fun and enjoyed the new additions to Magic Kingdom.  I was able to take everything in at my own pace to look for details and just enjoy the area. I enjoyed it to the point where I wanted to watch The Little Mermaid and Beauty and the Beast. Confession……when I did return home I watched Beauty and the Beast. 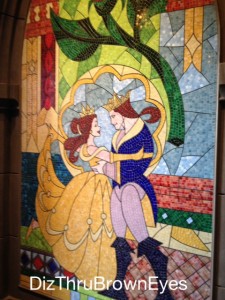