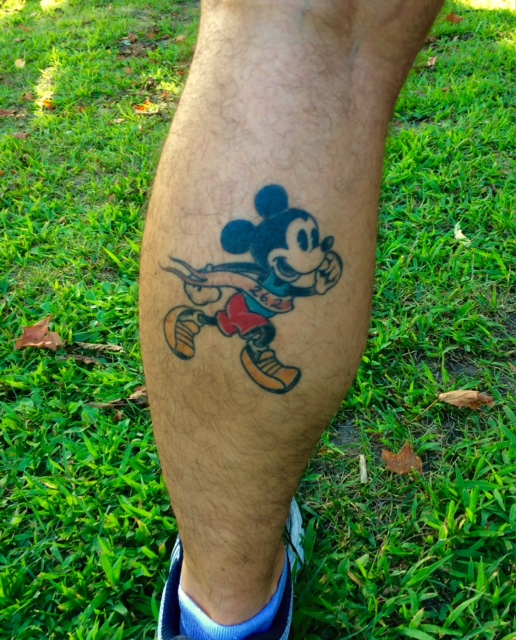 Some people have had the love for all things mouse from an early age because they grew up watching the Disney Channel, while for others it was magical feeling that they experienced walking into a Disney Theme Park for the first time. In any case, as Walt really wanted it to be, Disney has a way of invoking strong emotions in people. Those emotions lead some to display their love for Disney by getting a tattoo. In this series, we will talk to some of those people who are part of the “inkDisney” family. We want to find out why they love Disney so much and what inspired them to take their love for the Mouse to the next level. This week, we will talk to one of our readers. His name is Chris and he is from New Hampshire! 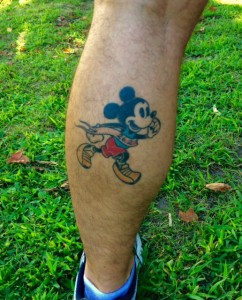 This is a hard one to answer. I was a fan of Disney movies as a kid for as long as I can remember, but that kind of describes a lot of kids. I was also a weird, geeky kid, as evidenced by my favorite school “educational” film being “Donald Duck in Mathmagic Land.” But I think my true love of Disney happened when I went to Disney World with my Dad in the late 80s and visited EPCOT Center (again, I’m a geek). I was hooked. Later on, my then girlfriend (and future wife) and I went to WDW for Spring Break in college, and we both caught the bug, big-time. And we’ve been returning for big events (Honeymoon, anniversaries, 30th birthday) ever since. So it was a slow process for me, but I think it turned to love sometime between my first ride on Horizons and my first walk down Main Street USA with my wife.

A little over an hour for the line work and color/shading.

I’m a runner and had run a few runDisney races in the past. But I had never done a marathon. Well, I finally took the plunge and ran the WDW marathon in January of 2014. I wanted to commemorate the accomplishment with something permanent, and a running Mickey tattoo seemed to be the perfect thing. One day I noticed my barber had a new Mickey tattoo (he’s a fan as well) and I asked him for his artist’s info. He happened to be a big Disney fan as well and had done many Disney tattoos. After two weeks and a few emails, I was in the artist’s studio getting inked. He created the design and found a perfect way to incorporate the 26.2 miles into the design.

Absolutely. I’m signed up to do the Goofy Challenge coming January, so I plan on getting a matching running Goofy one on my right calf. I also have a plan for two original EPCOT pieces: one simply involving the original pavilion icons on my arms, and a second, more “arty” one of the original entrance acrylic sculpture in front of Spaceship Earth at another location to be determined. I get a lot of compliments on my tattoo at races and especially at WDW, so I’m excited to get more ink to show off.