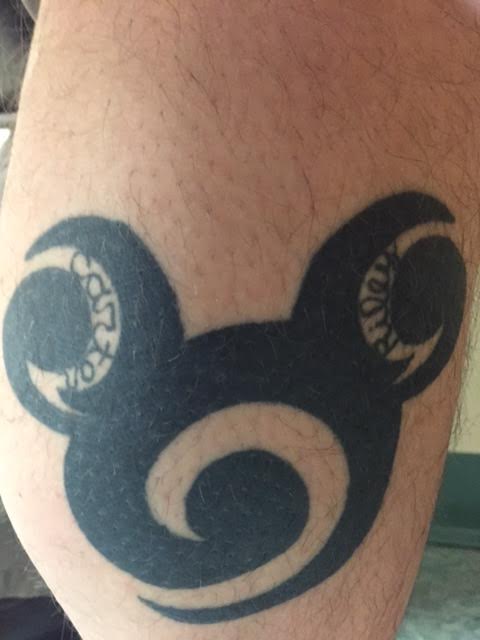 Some people have had the love for all things mouse from an early age because they grew up watching the Disney Channel, while for others it was magical feeling that they experienced walking into a Disney Theme Park for the first time. In any case, as Walt really wanted it to be, Disney has a way of invoking strong emotions in people. Those emotions lead some to display their love for Disney by getting a tattoo. In this series, we will talk to some of those people who are part of the “inkDisney” family. We want to find out why they love Disney so much and what inspired them to take their love for the Mouse to the next level. This week, we will talk to one of our readers. His name is Steven and he is from Swansea, Massachusetts! 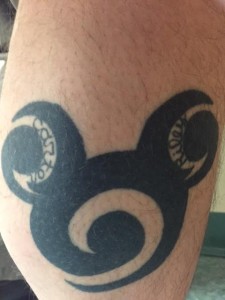 I was fortunate enough to head to Walt Disney World three times as a child with my family. After a bit of a hiatus, my wife and I went back to the World with our 18 month old son Carter along with Baby #2 on the way. I remember standing outside the Emporium at the corner during the Magic Kingdom’s afternoon parade with our son sleeping in his stroller and started to tear up. The quality of family entertainment Disney offers sucked me back in! In the close to ten years since then I’ve been to Walt Disney World countless times, Disneyland, and two Disney cruises. I’ve also been able to transfer my love of Disney into a career as I’ve been a vacation planner with Mouse Fan Travel for over five years!

I got my tattoo about four years ago at a tattoo party. Not to say that peer pressure got to me, but I wanted something that represented me and was able to be covered if I chose to.

The tattoo took a little over three hours to complete. The outline didn’t take very long, but filling in all the black took a while. I chose a single solid color in hopes that the chances of it fading would be lessened.

Once I knew I was getting a tattoo, I wanted to get something that would be timeless and not cartoony. Whenever I tell people I have a Mickey Mouse tattoo, they expect me to have a large Sorcerer Mickey somewhere! I did an internet search for Hidden Mickey tattoos and this was a design I liked that was masculine enough but also didn’t scream Disney unless someone knew what they were looking at.

Nope, no plans on any more tattoos. I was able to get both our kids names in the design and with my fear of needles, I’m surprised I got this one to begin with!