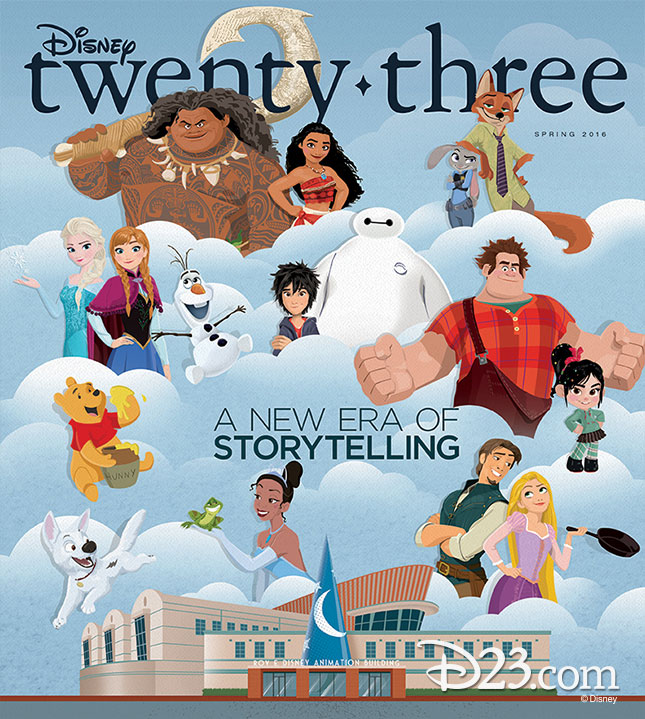 Walt Disney Animation Studios has a wonderful way of telling stories that are creative and heartfelt.  I can not wait to receive the spring 2016 edition of Disney twenty-three.  Here is a look at what this edition will include. 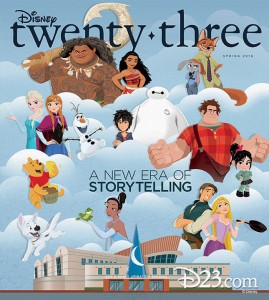 BURBANK, Calif. – February 17, 2016 – In the 10 years since John Lasseter and Ed Catmull took over the reins of what is now Walt Disney Animation Studios, Disney has enjoyed incredible creative and box office success with such films as Tangled, Wreck-It Ralph, Big Hero 6, and, of course, Frozen. The spring 2016 issue of Disney twenty-three looks at the creative talents—from writers and directors to producers and animators—who have driven this wave of superior filmmaking that has resulted in two Academy Awards® for Best Animated Feature for the studio.

Disney twenty-three, available exclusively to D23 Gold Members, includes exclusive interviews with Lasseter and Catmull, as well as the teams behind Walt Disney Animation Studios’ run of hits, discussing the secrets behind their work and how a Disney animated film goes from concept to creation. Plus, Disney twenty-three unveils rarely seen visual development art created for the Studio’s most recent films. There are also advance looks at the upcoming animated films Zootopia—including a revealing one-on-one with star Ginnifer Goodwin—and Moana.

In addition to the animation celebration, the issue offers a sneak peek of Captain America: Civil War, featuring exclusive interviews with star Chris Evans and one of the film’s directors, Joe Russo. And director Jon Favreau details the incredible work behind crafting the stunning live-action adaptation of The Jungle Book, including how he snared Bill Murray to voice Baloo the bear.

Also included in the spring issue of Disney twenty-three:

Disney twenty-three, which is delivered directly to fans’ doorsteps, is offered exclusively to D23 Gold and Gold Family Members as a benefit of their membership. The latest issue will begin arriving in late February.