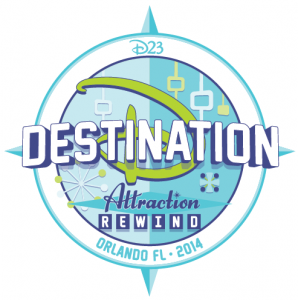 For those that are attending or thinking about attending D23 Destination D: Attraction Rewind, more details about the event has been released.  Below is the official press release.

BURBANK, Calif. – September 4, 2014 – D23: The Official Disney Fan Club has unveiled more of the experiences in store for members at what is sure to be the can’t-miss Disney event of the year—D23 Destination D: Attraction Rewind presented by H2O Plus. Taking place November 22 and 23 at Walt Disney World Resort, the event will bring Disney Legends, archivists, Imagineers, and luminaries together to celebrate fan-favorite attractions of years past, including Adventure Thru Inner Space, If You Had Wings, and 20,000 Leagues Under the Sea, with rarely seen concept art and images, vintage video clips, and hours of revealing stories. In addition, there will be a full day of presentations showcasing Disney’s contributions to the 1964–65 New York World’s Fair.

Tomorrowland supervising art director Ramsey Avery (Star Trek Into Darkness, Minority Report) will give members a behind-the-scenes sneak peek at the making of the upcoming release from Walt Disney Pictures. Avery will detail how the production team reconstructed elements of the World’s Fair for the upcoming film, which stars George Clooney. “I had a great experience working on Tomorrowland and recreating some of the very iconic environments from the 1964 World’s Fair, especially it’s a small world, and am excited to share some of that behind-the-scenes process with Disney fans,” says Avery.

During the panel “Rediscovering Discovery Bay,” Disney Legend Tony Baxter will take guests on an in-depth tour of the never-built themed expansion for Disneyland through rarely seen concept artwork and models that he worked on during his time at Walt Disney Imagineering. Discovery Bay, as an early press release stated, was intended to “bring to life a time and place that climaxed an age of discovery and expansion.”

Additional panels have just been announced.* More information may be found at D23.com/Events.

·        A World’s Fair of Disney Legends: Marty Sklar, Alice Davis, and Bob Gurr discuss their contributions to the Fair.

·        Ford’s Magic Skyway: Bill Cotter and Disney Legends Bob Gurr and Bill Sullivan reveal some of the secrets behind one of the Fair’s most innovative attractions.

·        Carousel of Progress: Disney Legend Marty Sklar and Imagineer Gary Landrum talk about the creation of this one-of-a-kind show.

·        Lost on the Way to the World’s Fair: Walt Disney Archives Director Becky Cline reveals some of the proposed creations that didn’t make it to New York.

·        Disneyland: Fond Memories of the Past: Becky Cline and historian Stacia Martin journey through some of Disneyland’s most beloved attractions of yesteryear.

·        Retro Rewind References: Imagineers Wyatt Winter and Jason Grandt reveal some of the hidden references to past attractions in today’s theme park creations.

·        An Evolution of Make Believe Made Real: Imagineers Dave Minichiello and Pam Rawlins detail the creation of the Seven Dwarfs Mine Train and explore its roots, which began in 1937.

·        That Was Entertainment!: Disney Legend Ron Logan lifts the curtain on some of the most fondly remembered events and entertainment from Disneyland and Walt Disney World.

Plus, Mickey’s of Glendale, the famed Walt Disney Imagineering store, is setting up a pop-up shop, which will open Friday, November 21 and run through the weekend, offering a selection of exclusive Imagineering merchandise as well as limited-edition pins, T-shirts, and collectibles themed to the event. Mickey’s of Glendale will also carry an exclusive collection of items themed to Pleasure Island, including pins, pin sets, T-shirts, and glassware.

In addition to more than a dozen panels and presentations, the weekend will include:

·        A special weeklong exhibit designed by the Walt Disney Archives in honor of the event.

The weekend event will take place in the convention center at Disney’s Contemporary Resort. Tickets are currently available to all D23 Members, and D23 Gold and Silver Members receive special ticket pricing. All guests will receive a gift created just for the event.

More details about the program and tickets for D23 DESTINATION D: ATTRACTION REWIND presented by H2O Plus, as well as a special offer just for members of D23, can be found at D23.com/Events.

* Events, panel order, and talent are subject to change. 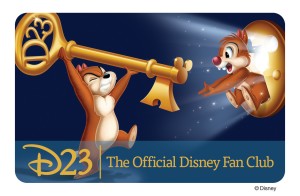