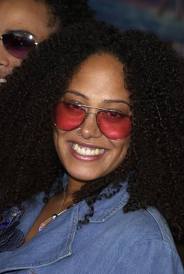 Cree Summer is a Canadian actress and voice actress.  Her best known role was college student Winifred “Freddie” Brooks on A Different World.  Between 1983 and 2006, Ms. Summer has voiced at least 100 animated characters.  Her voice is in animated films, commercials, cartoon television series, and video games.  Her Disney resume consists of:

It is not a Disney series, but I loved her voicing Elmyra Duff in Tiny Toon Adventures.