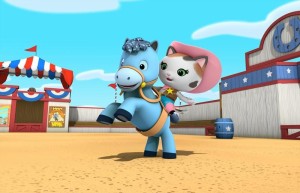 On November 24th, a new show, Sheriff Callie’s Wild West, will be making its debut on Disney Junior.  Sheriff Callie, staring Mandy Moore as the voice of Callie, is a kitty cat who protects the town of Nice and Friendly Corners.  By Sheriff Callie’s side is Deputy Peck, a woodpecker voiced by Lucas Grabeel of High School Musical fame.  Callie’s horse, Sparky, also gets help from the local sheriff in some episodes.

Sheriff Callie’s Wild West is geared toward children ages 2-7. Through Sheriff Callie, children should walk away with lessons teaching about good manners and social ethics.

The series can be seen on WATCHDisneyJunior.com and the WATCH Disney Junior app for tablets and smartphones starting, Sunday, November 24th.  The series will premiere on Disney Junior Channels worldwide in 2014.