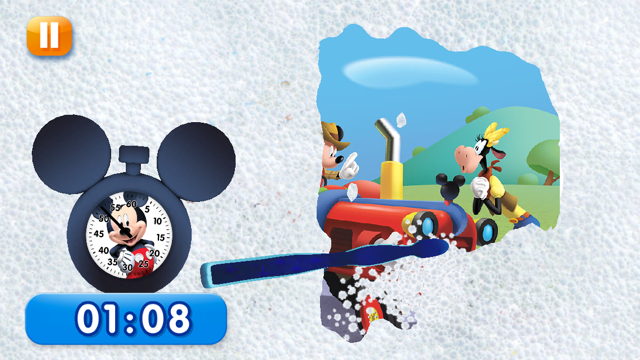 On March 17, I had the opportunity to participate in a #ProHealthKids chat on Twitter sponsored by Oral-B and hosted by Type A Mom Kelby Carr with special guest Olympic Gold Medalist Dominique Moceanu.  As part of the conversation, the Oral-B Disney Magic Timer App was introduced.

This is a free app that is designed to help your kids brush longer by using Disney and Marvel characters. It can be downloaded from the Apple App store or Google Play.  A Crest or Oral-B Pro-Health Stages product like a toothbrush or toothpaste can be scanned for more features.  The app encourages children to brush their teeth for 2 minutes and there is a timer that counts down for them.  Here is a video that talks more about the app. 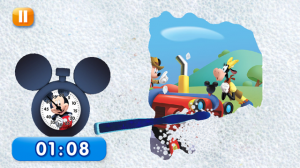 According to the American Association of Pediatric Dentistry , tooth brushing can prevent tooth decay, so I decided to try this app out on my son to see how he likes it in hopes of improving his brushing. He currently brushes (or licks the toothpaste off of the brush) twice per day and has gone to see a pediatric dentist twice; he did great both times!  Some days, it is harder to get him to brush than others.  Last night, I gave him the toothbrush after I scanned it with my iPhone, or tried to.  I haven’t quite got the hang of what exactly am I supposed to be scanning.

As the music started playing, he was looking at the screen, trying to figure out what was going on. The virtual toothbrush “brushes” away the toothpaste as the timer decreases, revealing a picture. It splits the picture up into 4 parts like you would concentrate on 4 parts of your mouth to brush.  As he realized the picture was of Mickey Mouse Clubhouse, he started to smile so I had to encourage him to keep brushing.  He stopped with 30 seconds to go, but it was the longest I had gotten him to do so without me intervening.  At the end of the 2 minutes, a sticker is revealed as being earned and the brush time is recorded on a calendar.  I tried it again this morning and it was much of the same, but he seemed to be more excited since he knew a picture was coming.

I think that kids will enjoy this app if they are familiar with the characters.  I will continue to use this app in hopes that he will get to a full 2 minutes of independent brushing.