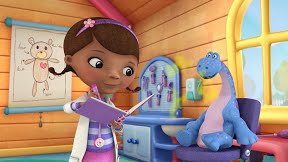 The Disney Junior Channel kicked off their Doc Mobile Tour, inspired by the series Doc McStuffins, in Boston on August 18th.  The Doc Mobile, a 27 foot Airstream, features an area for children to conduct check-ups on toys as well as learn about health and wellness in an age appropriate manner.  During the multi-city tour, doctors from the Artemis Medical Society will be present.  This group of African-American physicians formed this group after seeing themselves in the character of Doc McStuffins.

Scheduled tour dates are as follows(events are 10:30am-4pm unless noted) :

Washington D.C. – *Location To Be Announced

Other events coming up are: