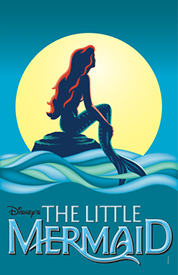 I am very excited to be attending Disney’s The Little Mermaid at the Fox Theatre on July 8th.  Tickets are currently on sale for performances being held July 8th – 13th.  To learn more about this production, the official press release is below.

ATLANTA (April 23, 2014) – Atlanta audiences are set to take a trip under the sea with Disney’s family friendly extravaganza Disney’s The Little Mermaid, featuring bright, inventive sets and dazzling costumes!  This fun-filled, timeless tale will come to life on stage July 8-13 at the Fox Theatre, kicking off the Fifth Third Bank Broadway in Atlanta 2014/2015 series.

In a magical kingdom fathoms below, we meet Ariel, the little mermaid who is tired of flipping her fins and longs to be part of the fascinating world on dry land. Joining her are Sebastian, Ariel’s crabby sidekick; Ursula, the evil sea witch; Triton, King of the Sea; and the handsome and human, Prince Eric. Based on the Disney animated film and hit Broadway musical, The Little Mermaid is making its Atlanta debut. Featuring all the audience favorites such as “Under The Sea” and “Part of Your World” as well as new songs written by Oscar-winning Disney tunesmith Alan Menken, the mastermind behind productions such as Beauty and the Beast, Aladdin and Pocahontas.

The Fort Worth Star-Telegram praised this production as “a thoroughly entertaining theatrical experience, especially appreciated by kids who love the movie — and their parents and grandparents.”  The Dallas Morning News claims, “The Little Mermaid reels in the gold,” and Theater Jones says, “The Little Mermaid hooks the audience and keeps them captivated.”