Some people will never understand why I love Disney.  I have learned to accept that along with the remarks that go with it. Yes, being a Disney lover I hear “You going there again?” or “Why do you keep going back?”  It use to baffle me that others would have so many comments or opinions on where I wanted to invest my time.  Do those that go to the beach or Las Vegas get the same comments?  I doubt that.

Disney World does mean more to me than riding Splash Mountain or taking a picture with a character.  Maybe that is what others do not understand.  I have developed friendships, strong family-ties with a handful of people that I would not trade.  During my last trip, 12/1-4, I had the opportunity to do a girls’ trip with Sara M. (@DisneySara), who is the author of the blog Mickens Mouse  (mickensmouse.blogspot.com).  This was the first trip we had a chance to really talk, laugh, and shop.  We refer to shopping as “enhancing”.  A term used by another close friend and shopping pal, Toni F. (@Dopey926).  We spent more times in stores than on rides.  We danced down Main Street USA at Magic Kingdom and enjoyed eating sweets while taking in The Osborne Spectacle of Dancing Lights at Disney’s Hollywood Studios.  Another friend Phil A. (@PAdams626) drove down for a day with his son to spend time with the girls at Epcot and Magic Kingdom. 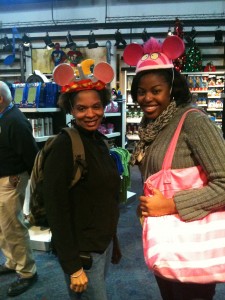 Last year my sister and I took our first sisters’ trp. We went during the first weekend of Epcot’s Food and Wine Festival and learn about Epic October.  Growing up we were not as close due to the five year age difference.  We had different friends and participated in different activities.  Fast forward to adulthood and we are running around four parks trying new sweets and collecting pins. She refuses to collect
Vinylmations, but as I recall she purchased one.  We participated in the 2010 Wine & Dine ½ Marathon Relay. We earned our medals and the soreness that follows after a race.  My sister and I attended our first meet-up at 2010 WDW Foodie Fest hosted by AJ (@DisneyFoodBlog).  We had so much fun meeting AJ and other tweeps.

Family and friends are two of the main reasons I love going to Disney World.  I no longer feel the need to defend my decision to go to the “Happiest Place on Earth.”  What makes me even more excited about taking trips there is to be able to share it with my nephew, who made his grand entrance into the world this November.  Yes, his auntie will be purchasing him an annual pass. 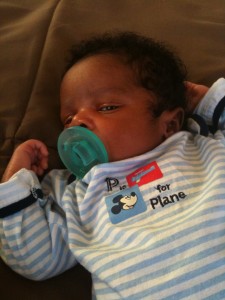 Plans for trips in 2012 with family and friends are already in the works.  I of course will write about how the plans are coming along and the trips themselves.  My love for Disney will never fade;  it only gets stronger with trips with family, friends, and meeting new people who also share the love of the magic and pixie dust.