I love speaking to others about their love of Disney, how they incorporate Disney into their lives, and just knowledge of how they “do” Disney.  Jillian D., owner/blogger of The Musings of Jillie D ,is a married mother of one.  The family collects Disney Tsum Tusm and has an impressive collection. 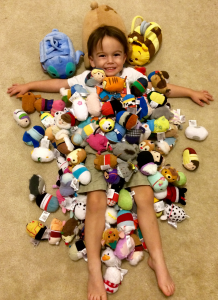 -Why did the family decide to collect Tsum Tsum?
We’ve been collecting since they were released in July 2014. Cole was 2 at the time, and they were a small, cute toy that was easy for him to hold and play with. He liked to “help” play the game, and pop the bubbles. That’s how they became his  “bubble friends”. We had no clue it would turn into the collection we have today!
-What is the favorite character and why?
My favorite is Snow White (she’s the only one that *I* own, and she’s currently locked in my Snow White curio. She’s also the only duplicate, mine doesn’t count for total count or for playing with). Cole says his favorites are Lilo & Stitch (probably because the mailman just brought that set today). I think his overall favorite is mini Duffy, he is a frequent car companion. Kirk said his favorite is Honey Lemon.

-How many do you have?
Yikes, a LOT! We have 1 medium, 2 carriers and 110 minis.
-Which one or ones do you want to add to your collection?
We would really like to add Miss Bunny.

-What character would you like to see as a Tsum Tsum?
I would love to see some of the older character done, Todd and Cooper would be neat ones to see. 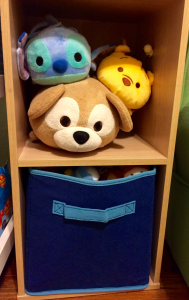 -How do you display/store your Tsum Tsum?
No display, it would take up too much room! Since he plays with all of them on a regular basis, the minis are all in a 12x12x12 cube!