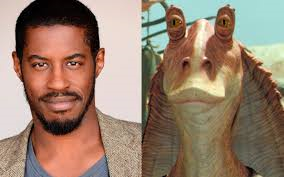 Ahmed Best is an American actor, voice actor, and musician. In 1999, Mr. Best provided motion capture and voice of the character of Jar Jar Binks in the Star Wars franchise. He created, wrote, directed, and produced his own TV show, This Can’t Be My Life. For Disney, Mr. Best played Sal Sackelson in the Zeke and Luther episode “Bro’d Trip”.