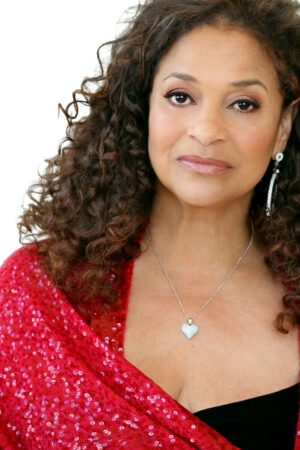 Deborah “Debbie” Kaye Allen is an American actress, dancer, choreographer, producer, and song writer. She is best known for her role as Lydia Grant in the television series Fame.  Ms. Allen later began working as director and producer. She produced and directed 83 of 144 episodes of A Different World.  In 2000s and 2010s, Ms. Allen directed television shows, including All of Us, Girlfriends, Everyone Hates Chris, How to Get Away with Murder, Empire, Scandal and Jane the Virgin.  In 2020, Ms. Allen directed the Netflix musical film Christmas on the Square starring Dolly Parton.

Ms. Allen experienced racism (one experience out of many more than likely) as a teen within the dance community.  When she was sixteen, she had a successful audition for the North Carolina School of the Arts.  She was given an opportunity to demonstrate dance techniques to other prospective students applying to the institution. However, Ms. Allen was refused admission and was told her body was not suited for ballet.   This is what African American dancers were told to discourage them from dancing.

Ms. Allen has several connections to Disney including directing several episodes of That’s So Raven and portraying Yvonne in Blank Check.

If you would like to read more about Disney in Black History, here is a previous post.