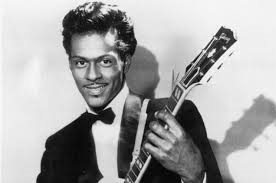 Charles Edward Anderson “Chuck” Berry (1926-2017) was an American guitarist and singer-songwriter who could be considered one of the pioneers of rock and roll music. Some of Mr. Berry’s hit songs include Maybellene, Roll Over Beethoven, Rock and Roll Music, and Johnny B. Goode.  He was among the first musicians to be inducted into the Rock and Roll Hall of Fame on its opening in 1986.  Mr. Berry contributed the song Route 66 in the 2006 Disney/Pixar film Cars. His song Surfin U.S.A. was used in The Shaggy Dog.